The most funny and preposterous patents of the USA 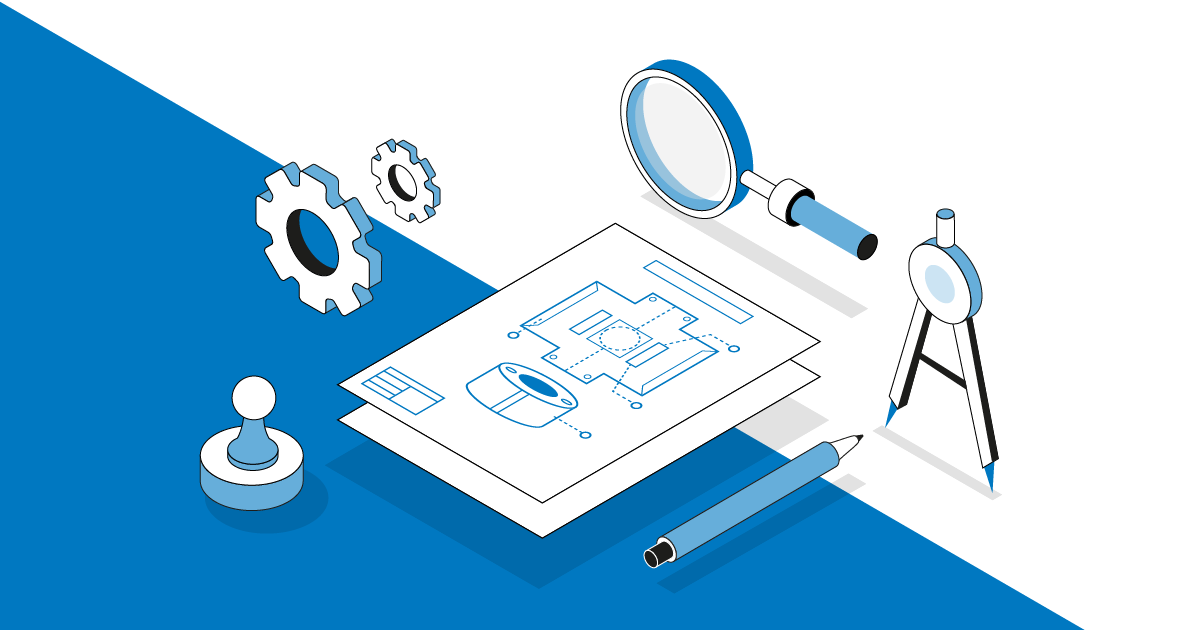 The world does not stand still, people are constantly coming up with something, and the ideas that sometimes seem to us not only to be out of demand, but also to be preposterous, are being patented subsequently. The topic on the most funny and preposterous patents that will seem to be useless to everyone except their inventors is inexhaustible. There are many such patents around the world, but it is in the USA that their number prevails. Below, I shall give the examples of the most, in my opinion, funny and preposterous patents of the USA. 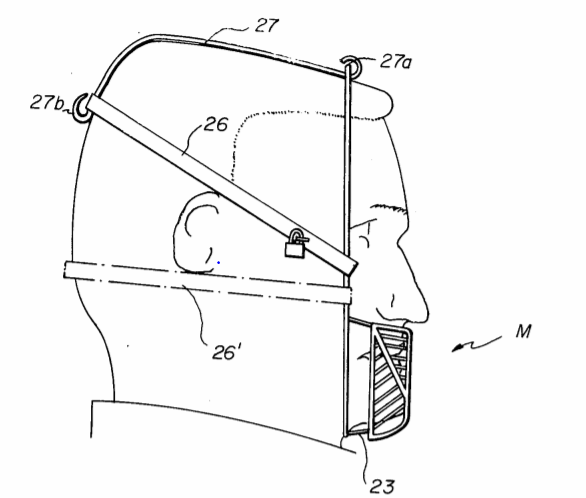 Let me introduce a patent for a face mask designed to prevent the user from eating. This invention is recommended for the use by fat people, who want to reduce their weight, and who, at the same time, cannot withstand the temptation of eating something. Walking hungry, and even in such a mask is a doubtful pleasure. 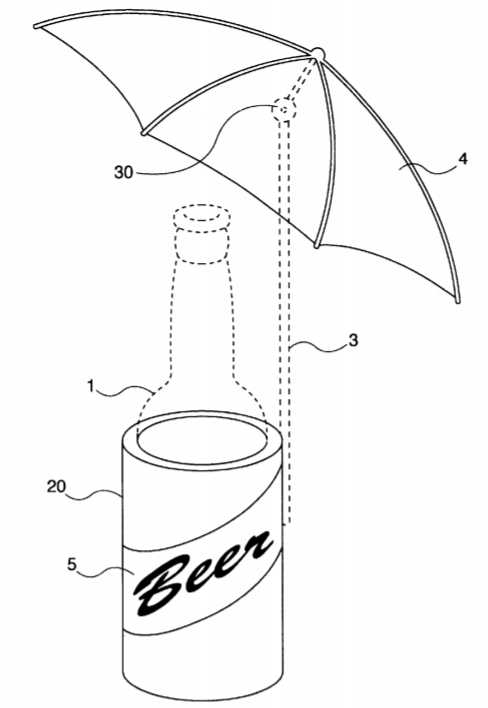 And here is another unique invention, which is a small umbrella that can be removably attached to a container with a drink, so that to protect the container with the drink from the direct sunlight. Perhaps, this invention will be useful to someone, but it will not help to solve the universal human problems. 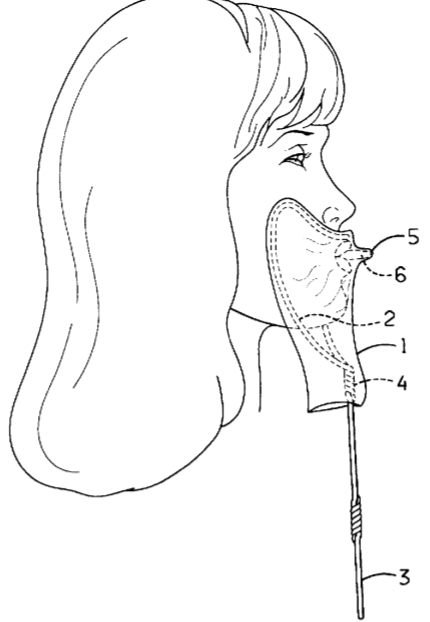 A shield for kisses consisting of a thin flexible membrane and a frame or a holder. The user places the shield for kisses between his lips and the lips or the cheek of the person, whom he plans to kiss, and he kisses the intended recipient of his love through this device. With this method of kissing through the shield made of the thin flexible plastic, the transmission of the microbes will be prevented and the persons, who are kissing, will be able to avoid the transmission of dangerous diseases. 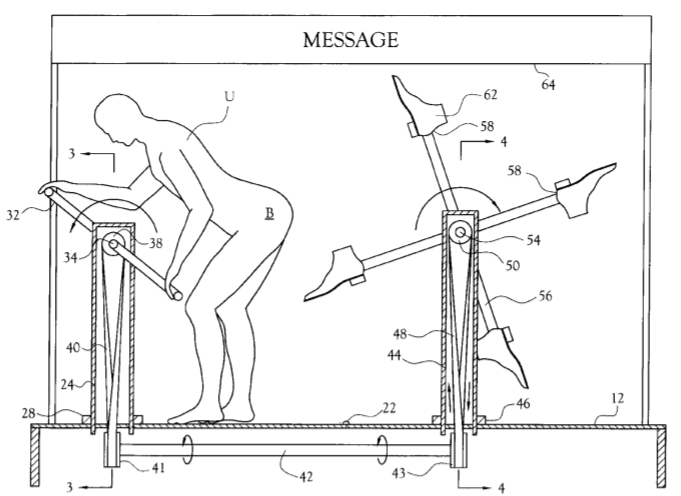 The proposed device for amusement includes a user-controlled device for repetitive self-hitting on the user’s buttocks by the multiple elongated levers carrying the flexible extenders that rotate under the user’s control. Thus, this device allows the user amusing by getting the kicks, the frequency of which is determined by the very person, who is amusing. Well, what can I say, the Americans have strange amusements!

Patent No. 6241575 “A bra with the built-in containers for storing beverages” 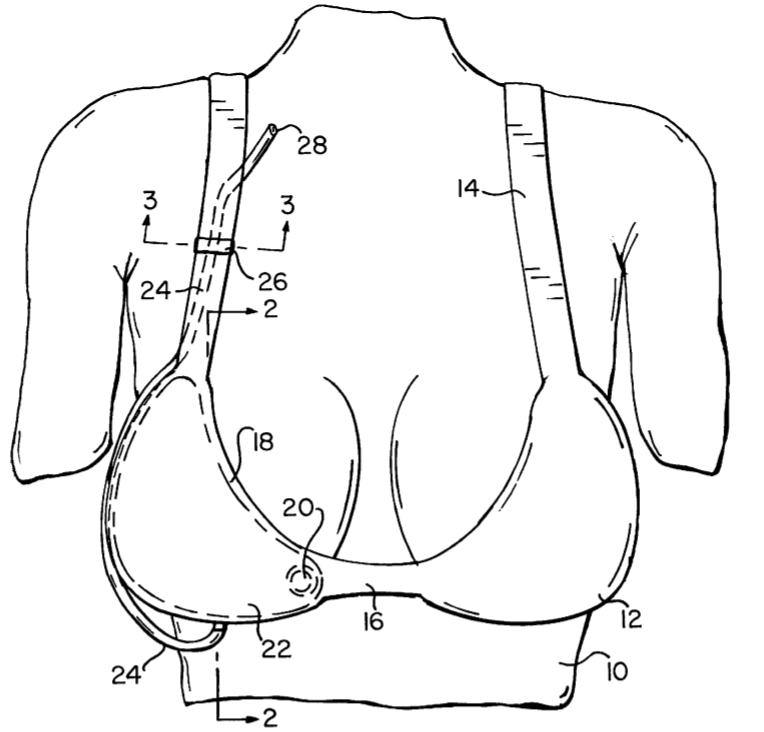 With such a device, the ladies can forget forever about thirst forever. With the help of the patented bra, the women will be always able to carry drinks with themselves, both as nonalcoholic and alcoholic, and an outlet opening for the consumption of the drinks in the form of a tube pulled through, for example, their backs, will allow quenching thirst everywhere, in addition, if one wants to replenish the liquid inventory, then it can be done through a special inlet opening in any time that is convenient for the user.

The proposed device allows keeping one’s teeth, gums, face and neck muscles in shape. According to the patent holder, due to the fact that the modern food requires fewer and fewer efforts to chew it, the muscles start becoming weakened, but one should not be in despair! This device will always help you to keep your teeth, gums, face and neck muscles in shape, and if you are bored with training alone, you can always call your friend for training, because this trainer for teeth also provides for training in pairs! 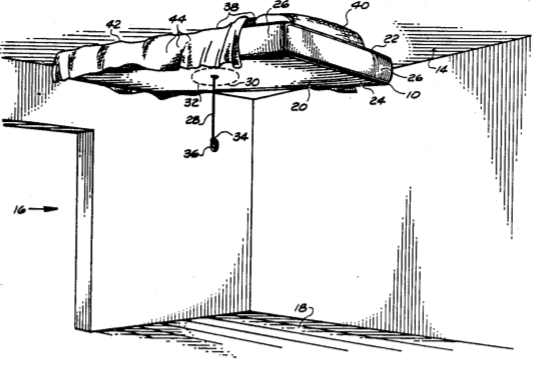 If the bed in your apartment takes up a lot of space, then this variant is for you. The patented device is filled with a gaseous substance that is lighter than the air, such as helium. If the amount of the gaseous substance is sufficient, buoyancy in the atmosphere will cause the bed to rise to the ceiling of the room, when the bed is not used, what will allow increasing the size of even a small apartment during the day. 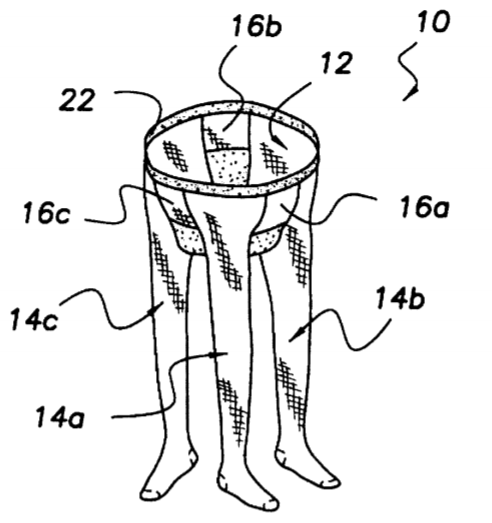 This is not a trick of the eye, you see the ordinary tights, just the number of the stockings is a little more than for two legs. And all this is for the case, if one of the stockings is damaged, then the spare one will come to the rescue. When using this miracle device, one should insert his legs into two openings for the legs in a usual manner, when putting on the pair of the tights, and the remaining “leg’s spare part” should be rolled up and folded with the fingertip into the pocket of one of the perineal elements provided in the device. And if a hole appears suddenly in one of the wearable parts of the pair of the tights, then the damaged stocking can be easily and quickly put off and replaced with the undamaged spare part of the tights. 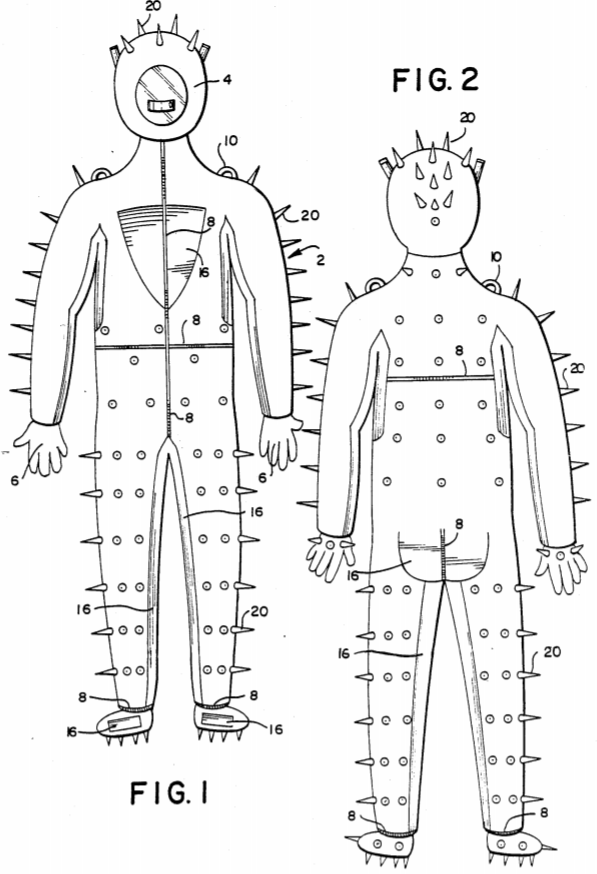 According to the inventor, this suit will protect against sharks. The device is a combined rubber suit and a helmet for the full coverage of the user’s body, which have many spikes protruding outward from them in order the shark will be unable to clamp the suit’s owner in its jaws. Apparently, the applicant has not taken into account the fact that the size of the sharks ranges from 17 centimeters to 20 meters, and many sharks will not be hindered by these spikes, and some sharks will not even have to chew the suit, the suit’s user will be swallowed wholly. 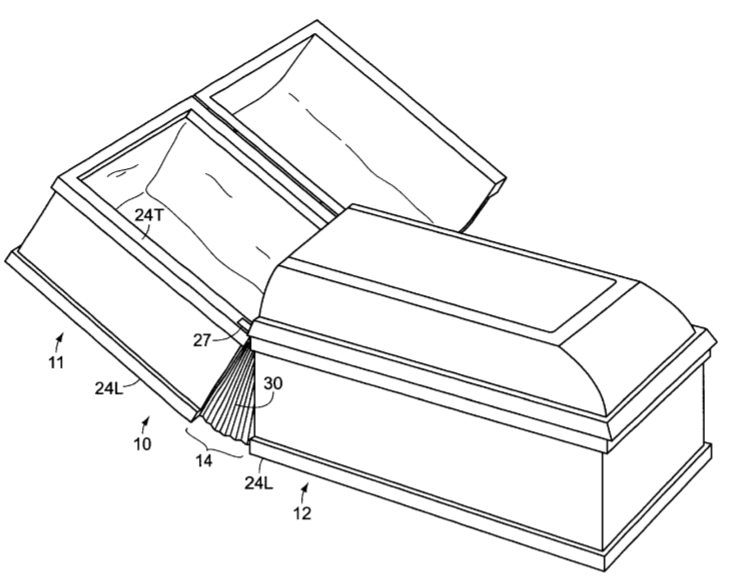 Another unusual invention is a coffin, which allows leaning a deceased person so that to confer him a natural position in order to show him to people, and then the coffin of the deceased person returns to a horizontal position for its subsequent transportation. And due to the fact that this is not the single patent for the devices of such kind, there is probably a demand for them.

As you have seen from the examples given above, the patents are quite often issued for the absolutely preposterous, strange and funny things. Although, somebody will perhaps find them useful. At least, one thing is clear – the inventors of these patents are full of imagination!